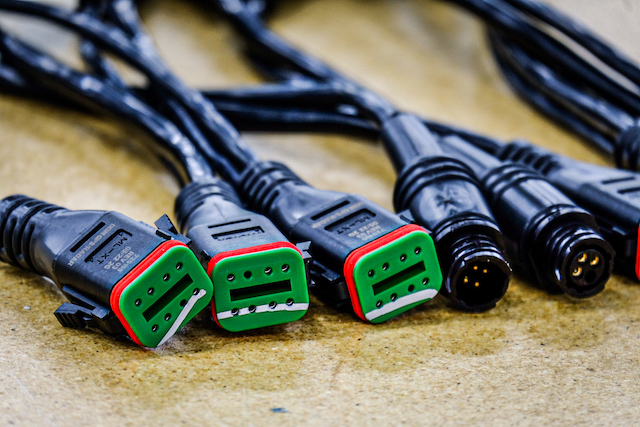 It’s not uncommon for a contract manufacturer to take an indirect journey to harnesses production. It’s a big part of what makes these Company Profiles so interesting. It’s also why I was excited to have a chat with Larry Manz, Director of Sales & Marketing at InSource. We first met Larry at the WHMA Conference back in February. The InSource booth was next to ours at the event and we inevitably struck up a conversation with Larry and his cousin Fred Manz from Marketing and Sales at the company. We later caught up with them at the exhibitor party at the recent EWPT Expo in Milwaukee. What were they doing exhibiting at these events? Well, that’s an interesting story in itself, and we’ll get to that later.

To learn the whole story, Larry took us back to the early 1990’s when his father Ken, InSource founder, was a key engineer at a manufacturer of components and peripherals for the HVAC industry. “He held several patents there and was instrumental in the freon recycling and recovery industry,” Larry described. “Prior to that, they didn’t know they needed to care about freon emissions.”

Around that period, the EPA came out with with an SAE standard to deal with the problem. Ken sat on that committee and was instrumental in drafting the regulation that launched R-134a, which did not have the ozone depleting properties of R-12 and R-22 refrigerants. Within his company, he helped develop the first equipment that would recycle the R-12 and R-22 refrigerants, capturing the ozone depleting elements of the gases.

The company flourished in this new industry, but as a union shop, the labor costs were quite high. As competitors jumped in, they feared losing business to Mexico or China. Ken saw an opportunity to become a contract manufacturer supplying the company, thus keeping good jobs in Ohio. In fact, that was the inspiration for the name of his new company, InSource.

He began in 1997 with a 2,520 ft.² facility making one product, a refrigerant identifier. The briefcase sized unit had a substantial amount of wiring and InSource actually bought the wires from a local supplier. “Then, in 1998, we purchased a wiring harness company in central Ohio that served the forestry equipment industry and began to make our own wires for the product,” Larry said. “We had new products that came in, and by the end of 1998, we were building harnesses as a contract manufacturer.”

It was at this time that they added another 9,000 ft.² of manufacturing space. The company’s growing engineeringdepartment also added Embedded C software capabilities as they started production of leak detectors and vacuum gauges.

In order to bring in new business, Ken hired a family friend as a sales consultant. “This was before everybody was using the internet, and he would go to the library and sit down with The Thomas Registry looking at the target markets and regions we had identified. He made cold calls and asked for an appointment,” Larry chronicled. “Sometimes he would get them, sometimes he wouldn’t — it was a different world then.”

In the early 2000’s, the company began to build harnesses and chassis assemblies for the emergency vehicle market. On the HVAC component side of the business, they also began to supply copper tubes and brazed assemblies. By the mid-2000s, they began development on a groundbreaking agricultural product. “We were instrumental in the design of a system that could track the seed placement of corn,” Larry detailed. “Basically, it was a small laptop that went in the planter and connected a bunch of sensors to gather data. It was wildly successful, and the company kept coming out with different electromechanical modules that could make changes to the seed placement, versus just getting readings, so it was really an agriculture technology revolution.”

These products required a great deal of custom PCBs. “By 2010, we decided that in order to drive our own destiny with lead times, we would start to build our own circuit boards.” In the 13 previous years, the company had gone through 10 different circuit board manufacturers. “They just couldn’t understand that in the agriculture business, if you miss a planting season, you have nine months before you can launch into the next cycle. You can’t miss the target no matter what,” he implored.  “We didn’t get into building circuit boards for ourselves based on cost, even though we were able to keep that margin. It was because we needed the parts when we needed them.”

Larry described some of the other technology enhancements the company made along the way to enhance their position as a crucial supplier to their customers. Among the most significant were the addition of automated crimping stations, laser etching of connectors, overmolding capability, and braided looming of harnesses. These enhancements greatly increased the companies design options and consistency. “We were also one of the first to go with ultrasonic splicing in the markets we serve. At that point it wasn’t even a UL recognized connection, but we were able to work with them and demonstrate that if you ultrasonically splice wires and put heat shrink over them, it’s as good or better than a butt connector.”

InSource developed a rather innovative solution in their overmolding process to help keep their customers tooling costs to a minimum. They actually designed a modular system that has three interchangeable sets of two-piece tooling for common connectors. This gives them an arsenal of modular tooling options. “The connector body might be straight, or a 90°, but everything else is the same. It’s the same cable and connector end. Or it’s the same connector and same body, but the cable diameter is different. So, once we have that set, we can just exchange them with different modules, so it’s very rare that we have to charge a customer for tooling,” Larry indicated.

On the heels of their ISO certification in 2016, and along with an additional 12,000 ft.² of production space, InSource launched its Quick Response Manufacturing system (QRM). Larry began his explanation of QRM saying there is definitely a Lean Manufacturing element to QRM, but that Lean Theory concentrates heavily on machine time. “What Lean does not focus on, specifically in a high-mix/low-volume shop like ours, is the time in between. We focus on MCT (Manufacturing Critical Time) which goes from the day the order is placed to the day you ship it to the customer.”

InSource analyzed what was happening in their facility and noted there were a lot of times when nothing was being done. “The order was placed, and we would wait for parts to come in. Then, after another wait for machine time, it ran and sat off in the corner waiting for the next machine. The more orders you run through such a system, the longer the time between jobs,” he noted.

According to Larry, most companies handle this by extending their lead-times, but they found the longer the lead-times, the less accurate their forecasts were. “When you focus on what happens in between jobs, you naturally shorten your lead-times, and the focus of QRM is that once you start a job, it doesn’t shut down until it ships to the customer.” InSource has been able to reduce their MCT dramatically. They went from averaging 56 days (including materials acquisition) when they first started the analysis, to about 28 days today. “Build days” went from 21 days to about 14.

QRM does require a much stronger partnerships with suppliers, however. “I can tell you the “build days” number is actually up from our low of eight days about two years ago, so we have actually lost some ground because of supply chain issues,” he lamented.

The company actually has nine cells running. Each cell has its bespoke cutters, splicers, braiders, testers and all the things it takes to produce a particular product. Instead of cutting all of the wire for a particular order at once, for example, it’s done in smaller batches. This enables InSource to be very flexible with respect to product changes and re-designs. “One of the biggest benefits of the system is the customer can change anything they want because we’re manufacturing in smaller batches.” That brings us to the February WHMA conference, and the recent EWPT Expo in Milwaukee where Larry and his crew were exhibiting. But they weren’t exhibiting the products from InSource. They were gauging the response to a new product from their newest business unit called JobFlow.

Like most manufacturers, InSource has purchased a lot of equipment and experimented with different manufacturing strategies through the years. “In every case we’ve been chasing the same thing: higher output efficiency,” Larry contended. “More specifically, how can we get more jobs completed with the resources we already have.”

In order to accomplish this goal, InSource has come up with many adaptations to existing products. Some of these innovations have been so successful, the company has decided to explore marketing them. One such product is BraiderBot (Fig. 1,2). It’s an add-on for common harness braiders that allows a single worker to run multiple braiders at once, thus removing a lot of the repetitive boredom from the job. Its robotic arms allow it to be operate hands-free on straight runs. Built-in sensors make sure there’s a perfect cone angle for clean consistent braids. Other sensors watch for, and automatically stop, at branches and termination points. For a quick look at this product, go to the YouTube search box and enter BraiderBot.

InSource has traditionally maintained three separate business units, those being Electronics, Refrigeration, and Wire Harness units. JobFlow will join them as the fourth unit. With the exception of sales administration and finance, each business unit has its own engineering, quality and production teams.

InSource is a family-owned business, but Larry and the management team seek to deemphasize that. “We like to look at the whole company as a family,” he stressed. “We work with our employees so they can take time off when they need and can have hours that work best with their family needs. That’s something that we’ve always tried to maintain; that we care about these people and we think of them as the InSource family. We have a great deal of loyalty with our customers. The community thinks highly of us, and that is certainly our desire.